In 2019 the world area under vines, corresponding to the total surface area planted with vines for all purposes (wine, table grapes and raisins), including young vines not yet in production, is estimated at 7.4 mha.

Starting with the Northern Hemisphere, overall stability can be observed in the European Union (EU) vineyards, which stand for the fifth consecutive year at 3.2 mha.

In East Asia, after over 10 years of significant expansion, the growth of Chinese vineyard (855 kha), second in the world by surface area just behind Spain, seems to be slowing.

In the United States, the vineyard has been consistently decreasing since 2014, and its estimated surface area in 2019 is 408 kha.

Australia the area under vines remained stable at 146 kha in 2019, in New Zealand the surface area grew by 1.6 % reaching a record-high of 39 kha. 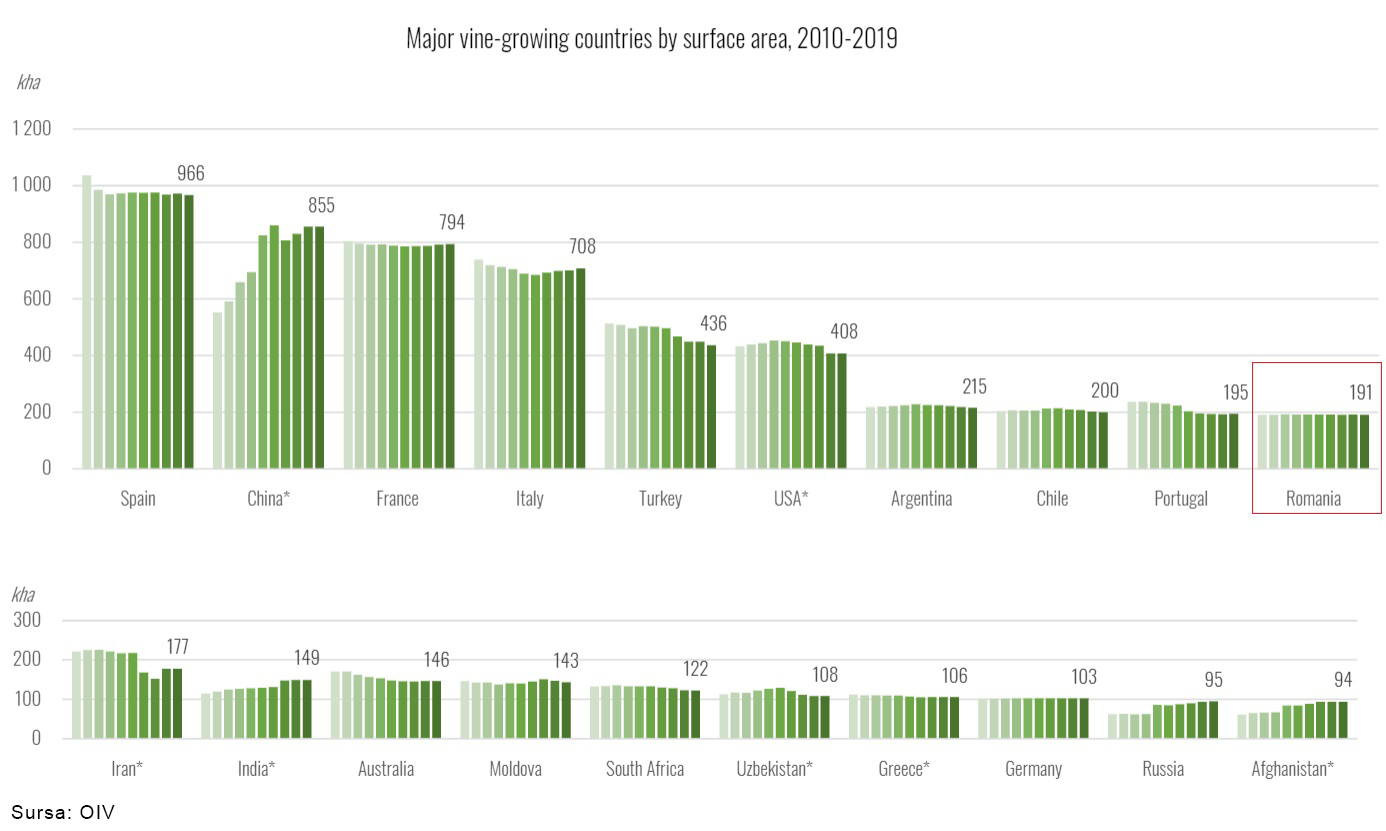 World wine production, excluding juices and musts, in 2019 is estimated at 260 (259,0) mhl, marking a sharp decrease of 35 mhl (-11.5%) with respect to the exceptionally high volume recorded in 2018. Overall, after two consecutive years that can be defined as extremely volatile, 2019 brings global wine production back to average levels.

In Asia, the new data available for China indicate an estimated vinified production of 8.3 mhl in 2019, marking a decrease of -10% with respect to the already relatively low production level of 2018.

In North America, wine production in the USA is estimated at 24.3 mhl, a decrease of 2% compared to 2018. It seems that this slight decline in 2019 does not depend on bad weather conditions or the raging fires that occurred in California in October (harvest took place just before), but it is a response to overcome an oversupply of grapes and wine.

In South America, the overall trend for wine production in 2019 is negative with respect to 2018.

In South Africa, 2019 production reached 9.7 mhl. This represents an increase of +3% with respect to the low volume registered in 2018, but it is still far from the average production levels recorded before the beginning of the drought that heavily impacted the country for three years in a row (2016, 2017 and 2018). 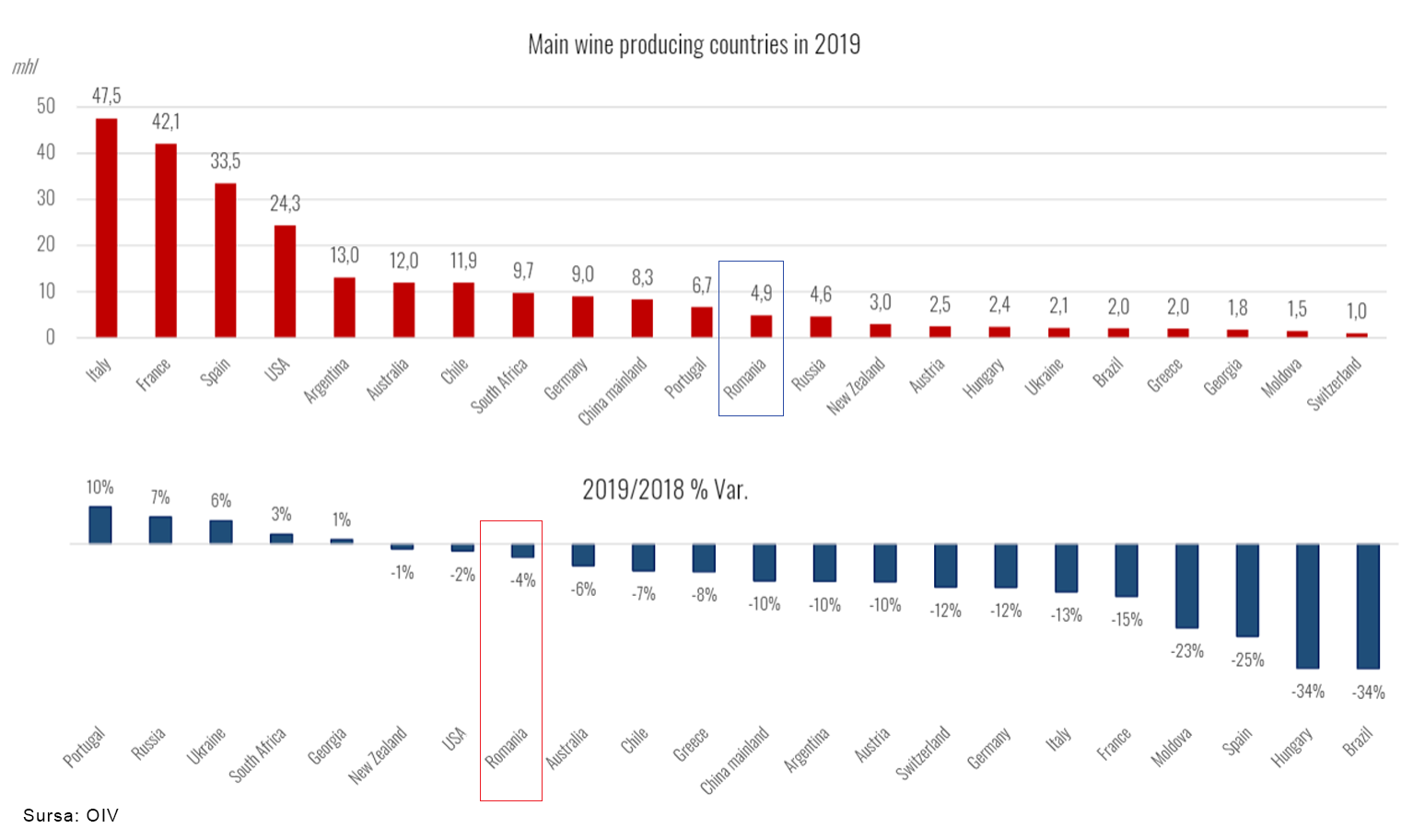 In 2019 the global value of wine exports is on the sustained growth path started in 2010 reaching a new record high. France was still the most important world exporter in terms of value, with 9.8 bn EUR exported in 2019. There were rises in the value of exports in many large exporting countries like France (+425 m EUR), Italy (+211 m EUR), and New Zealand (+84 m EUR). The largest declines concerned Spain (-234 m EUR) and South Africa (-73 m EUR).

In 2019 the international trade of wine in terms of volume was mainly dominated by three European countries - Italy, Spain, and France - that together exported 57.1 mhl, accounting for 54% of the world market.

In 2019 the top three importers in terms of volumes were Germany, the UK, and the USA, which together imported 40.4 mhl, reaching 38% of world total. These three countries represent 39% of the total value of world wine imports, reaching 11.9 bn EUR.

Sparkling wines are pursuing a sustained growth path in terms of production and consumption as well as international trade, thus confirming their increasingly important role in the global wine market. 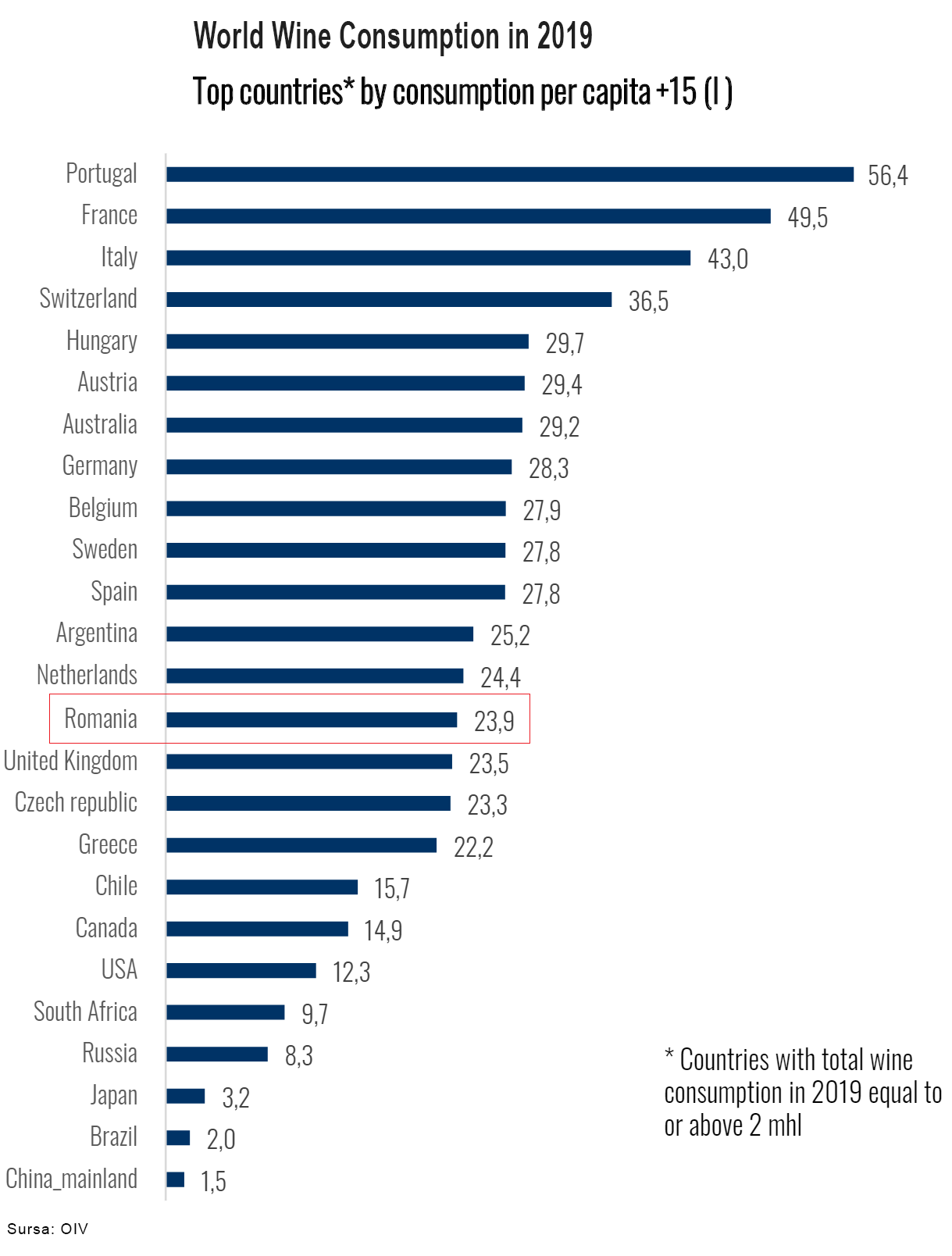 Impact of Covid-19 in the wine sector

At this early stage the information and statistical data available are insufficient to provide an accurate forecast and anticipate the scenario of the vitivinicultural sector in the future. However, thanks to permanent contact with the Organisation Member States, the OIV has certain qualitative information at its disposal.

The feedback given by the Member States reflects a radical change or transfer between distribution channels. The expected overall balance is a decrease in consumption, a reduction in average prices, and therefore an overall decrease in total sales value, turnover, margins and finally profits of the wineries.

As far as exports are concerned, economies in recession are not a promising market to develop, and during this pandemic, the largest consuming countries have been the most affected. Trade flows may recover along with the economy, but somepermanent changes could occur.