Winemaking has well defined areas, and within these areas wines under controlled origin can be produced. Winemaking habitat units in Romania are:

The winemaking region spans over a large distance which usually coincides with the historical province. It has some common characteristics regarding environmental conditions, the range of grape varieties and variety of wines that can be obtained.

The vineyard represents the winemaking unit whose spreading area meets all the common characteristics of climate and the sum total of all the microclimates across the area, soil types and soil varieties, as well as winemaking and wine culture technologies. The winery has a long tradition of winemaking and wines produced in a particular vineyard enjoy a good reputation.

The winemaking center comprises a smaller and a generally more compressed area. The climate and soil unit and the wine center technology are thus better highlighted. As a rule, a vineyard has two or more wine centers, but there are independent wine centers that are located outside vineyards. For wines with designation of controlled origin, the wine takes the name of the vineyard or that of the wine center.

The winemaking field is part of a wine center and is the smallest unit of the winemaking habitat. It is situated on a particular form of relief, has the same microclimate and the products obtained will therefore hold the same quality.

1. Transilvanian Plateau winemaking region consists of the following vineyards: Tarnave vineyard, Alba Vineyard, Sebes-Apold Vineyard, Aiud Vineyard and Lechinta Vineyard. Within these there are 17 winemaking centers and a separate independent winemaking center (Dej); these centers consist of many winemaking regions. The main line of production in the region is the white wine. A wide array of wines is obtained, from consumer wines to top wines, some of which are semi-sweet and even sweet. Aside from those recognized in the country and abroad, there are sparkling wines such as Jidvei, Alba and so on.

2. Moldavian Hills winemaking region is the largest and most famous winemaking region in Romania. It encompasses the numerous plantations of the predominantly hilly area between the Moldavian Subcarpathians, the Sub Carpathians, the Prut River and the inferior Siret Meadow. The winemaking region of Moldavian Hills comprises a total of 12 vineyards, namely: Cotnari Vineyard, Vineyard, Iasi Vineyard, Huşi Vineyard, Colinele Tutovei Vineyard, Dealul Bujorului Vineyard, Nicoresti Vineyard, Ivesti Vineyard, Covurlui Vineyard, Zeletin Vineyard, Panciu Vineyard, Odobeşti and Coteşti Vineyards. These vineyards include 44 winemaking centers and eight independent centers: Hlipiceni, Plugari and Probota in the North, Vaslui at the center, Grivita and Namoloasa in the South, Bozieni and Racaciuni in the West. This is a wine producing region but it also produces table grapes, however to a lesser extent. The region produces a wide array of wines, most of which are white wines (both consumer wines and top wines). These wines are generally sweet and they are just as good as the world's best wines (Sauternes, Lacryma Cristi and so on). In this regard it should be pointed out the fact that Cotnari wine is one of the best wines in the world. Dry wines are primarily produced in Odobesti Cotesti, and Panciu vineyards. Red wine production is limited.

This region corresponds almost entirely to the vast territorial unit of hills known as the Getic Plateau (or Getic Piedmont). It spreads between the Getic Subcarpathians in the North and the Romanian Plain. In the winemaking region there are 8 vineyards (Buzaului Hills, Dealu Mare, Stefanesti Samburesti, Dragasani, Craiovei Hills, Severin and Drancei Region), whose surface has 32 winemaking centers, three of which are independent wine centers (Segarcea, Tg. Jiu and Cruşetu Clearing). Wine production has a fairly vast diversity. With the exception of Sâmbureşti vineyard, which deals mainly with the production of red wines, all other wineries produce a wide array of white wines, ranging from everyday wines to top wines which are entitled to the designation of origin and quality levels.

Located in south-western Romania, in the triangle formed by Mures River with the Banat Mountains and at the border with Yugoslavia, this region somewhat meets the requirements of a single vineyard. Although the region relies mainly on the production of wine, the plantation doesn’t lack table grape varieties. The Chasselas are much more widespread and appreciated than the rest, and sometimes Muscat Hamburg and Muscat de Adda varieties enjoy the same reputation. They are all mostly used for local consumption in the crowded centers of the region and less for export.

The region comprises four vineyards (Minis-Maderat, Diosig, Valea lui Mihai, Silvaniei) and a total of 13 winemaking centers, two of which (Halmeu and Seini) are independent. Dominant crop varieties are those for wines and to a lesser extent for meals. Wine varieties to remember: Feteasca alba, Riesling italian, Feteasca regala, Furmint, Pinot gris, Mustoasa de Maderat and Iordana. Among the most important grape varieties for red wines are Cadarca and Burgund. Eco-climatic conditions enable production of a wide array of wines, both white and red (everyday wines, as well as quality wines). A good suitability for producing red wines can be found in the southern region, especially at Minis. In Simleul Silvaniei vineyard and partially at Zalau and Maderat the production of sparkling wines has started.

Located in southeastern Romania the area pertains entirely to the Dobrogea Plateau, clearly delineated between the Danube, the Black Sea and the border with Bulgaria. Physical and geographical particularities of the region are essentially marked by the plateau landscape, with low-moderate altitude and fragmentation, and clear-cut continental bioclimate of the Pontic steppe, whose excessiveness is partially mitigated by the proximity to the Black Sea and the water masses in the Danube Delta. The natural environment is of course the basic premise in the development of viticulture in this region; many of the wines produced here have been exported since ancient times. The entire ambience of environmental factors promotes their superior quality, but the climate plays the most significant role as it is particularly favorable. The continental climate with warm, droughty summers, moderate winters, early springs and late autumns allow for long vegetation periods. The Dobrogea Hills region includes the following vineyards: Sarica-Niculitel, Istria-Babadag, Murfatlar. Within these vines there are 9 centers (Macin, Niculitel, Tulcea, Valea Nucarilor, Babadag, Istria, Cernavoda, Medgidia, Murfatlar) and 5 more independent wine centers (Daeni, Harsova, Mangalia, Adamclisi, Chirnogeni). In terms of socio-economic status, the internal network of railways and roads ensures circulation and consumption of wine locally (including seashore tourist area) and in the rest of the country, and the Danubian naval and maritime networks facilitate export.

The region has two main production lines (table grapes and wines), thus numerous varieties are to be found in this area: Cardinal, Regina viilor, Chasselas, Muscat Hamburg, Muscat de Adda, Afuz Ali, and so on (table grapes varieties). Varieties for white wine: Aligote, Feteasca alba, Fetească regala, Pinot gris, Chardonnay, and for red ones: Cabernet Sauvignon, Pinot noir, Merlot, Sangiovese, etc. From this wide range of varieties several categories and types of wine are obtained, some of which, such as Murfatlar and, in part, Sarica-Niculitel, are known worldwide.

This region is located mostly on the terraces of the Danube in the south-eastern Romanian Plain and includes Ostrov and Greaca vineyards, 5 winemaking centers in the vineyards (Aliman, Baneasa, Oltina, Ostrov, Greaca) and 3 independent winemaking centers: Zimnicea, Giurgiu and Fetesti. Although some centers are at a distance, the presence of scattered vines placed in similar ecological conditions certifies the shaping of a wine-growing region. The region mainly relies on the production of table grapes. For this purpose, and especially in Greaca vineyard, several varieties are grown (from early ripening to late ripening of grapes). Winemaking production is varied, consisting mostly of table wines, white wines being the most common. Some of the red wines can achieve the quality that is required of a superior wine. The region includes Ostrov și Greaca vineyards.

8. Sands and other favourable areas in the South of the country 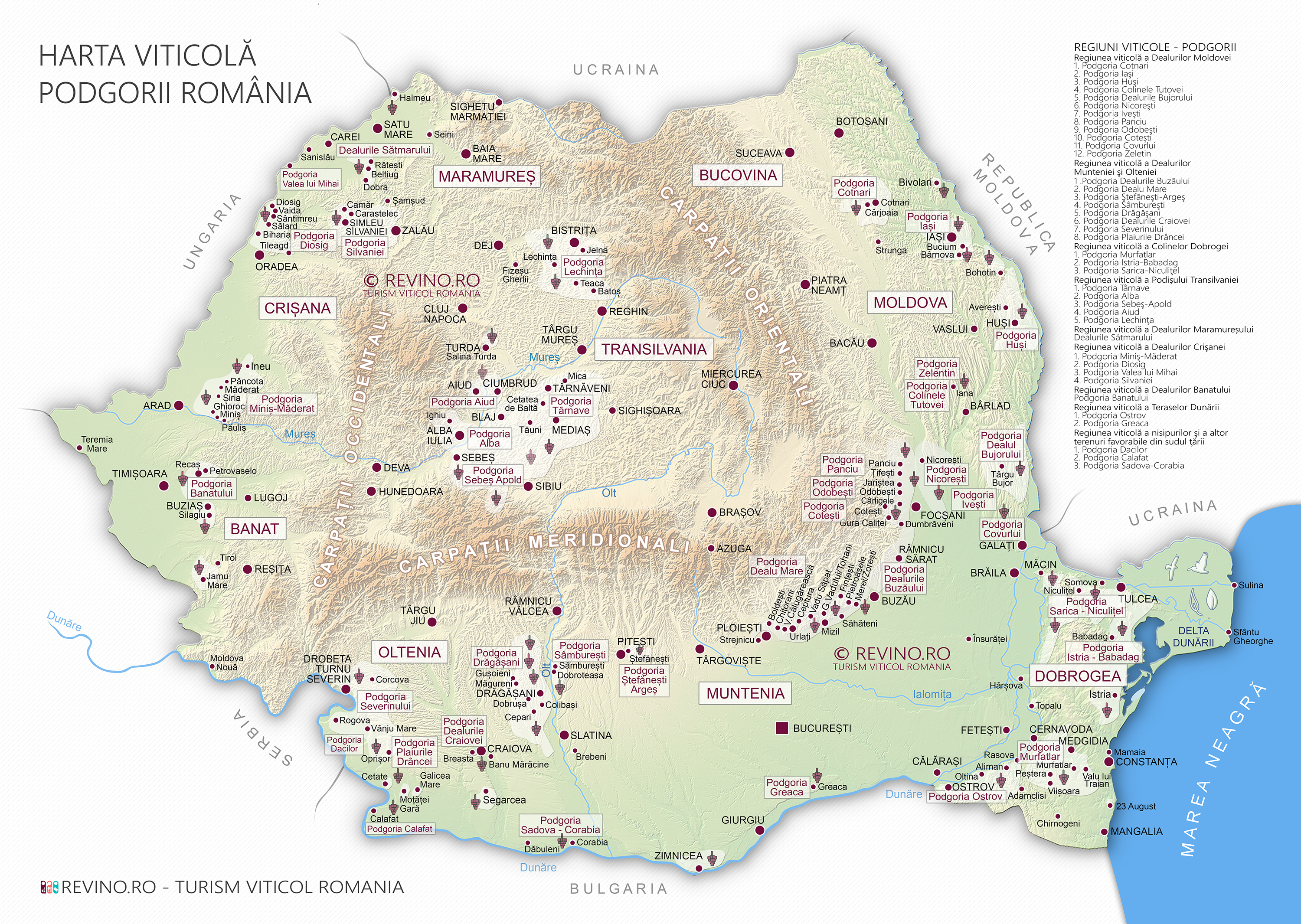