How to serve Sparkling Wine

A bottle of sparkling wine can mean feast, but it's also a dangerous weapon.

The amount of sugar (dosage) added after the second fermentation and aging varies and determines the level of sweetness of sparkling wine.

Foaming, as it is called by professionals, is very sensitive to traces of dishwashing detergent. Therefore, champagne glasses must be rinsed very carefully. 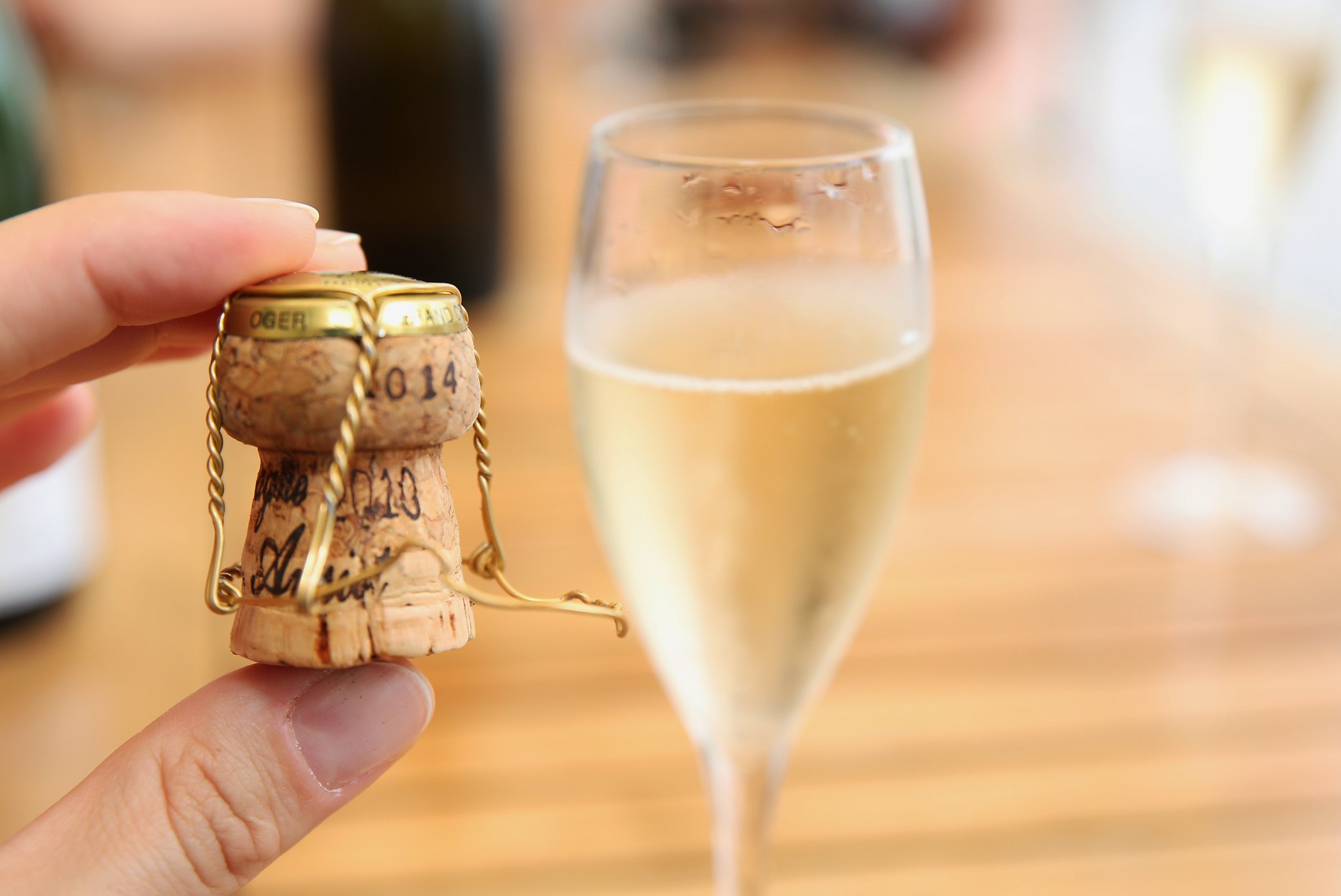 The History of Sparkling Wine

Sparkling wine is usually white or rose, but there are many examples of red sparkling wines such as Italian Brachetto and sparkling Australian Shiraz.

The effervescence of wine was observed throughout history and was noted by writers of ancient Greece and Rome. However, the causes of this effervescence were never understood. Over the course of time it has been attributed to the moon phases, as well as to the good and the bad spirits.

The tendency of quiet wine from the Champagne region to make bubbles was observed in the Middle Ages, but was considered a wine fault and was rejected.

Dom Pérignon was originally charged by his superiors at the Hautvillers Abbey to eliminate the foam, because owing to pressure many bottles would pop into the basement. Later, when deliberate sparkling wine production increased, cellar men had to wear heavy iron masks to prevent injuries that could be caused by the the popping of bottles. The discomfort produced by the popping of bottles can cause a chain reaction, thus, for cellars to lose 20-90% of bottles due to instability turned into a normality. Mysterious circumstances that surrounded the process of fermentation and carbon dioxide have led some critics to label sparkling wine "Devil's Wine".

Dom Perignon eventually came to appreciate the pearliness of sparkling wine and has perfected the technique of making this drink in the monastery cellars. Claude Moet turned the monastery into a winery of great fame in the 1740s. The best champagne produced in his wineries is now called after the monk who created it, in honor of his memory. Among the first countries that have ever produced sparkling wine are, apart from France, Russia and Germany, in the 19th century.

Sparkling wine is produced in a relatively similar fashion to quiet wine; there are however, some differences. In the winery, the grapes are picked at early stages, when they still contain high levels of acidity. Unlike in the case of the quiet wine productions, high levels of sugar are not desirable. When harvesting, it is mandatory to avoid contact with tannin and other phenolic compounds. This is why many premium wine producers still choose manual harvesting to the mechanical one, during which grains can pop and this may lead to maceration of the skin and juice. The processing of grapes often takes place close to the vineyard, so that they can be pressed and separated from their skin as soon as possible. Red varieties such as Pinot Noir, can be used in the production of sparkling wine due to the fact that their juice is white. Their juice only turns red after it has come in contact with the pigments from grapes skin. There are however some cases where contact with the skin is desired (in rose or red sparkling wine).

Primary fermentation of sparkling wine begins as in all other wines, although some manufacturers choose to use specially cultivated sparkling wine yeasts. The wines may go through malolactic fermentation. However, wine producers who want simple, fruity wines, quit this step. After fermentation, the base wines are blended in a cuvee. Although there are examples of sparkling wine made ​​from a single grape variety, such as blanc of blancs from 100% Chardonnay, most sparkling wines are a blend of varieties, vineyards and years of harvest. Great manufacturers of champagne, such as Moet & Chandon, use a selection of several hundred base wines to make a cuvee that reflects the "house style". 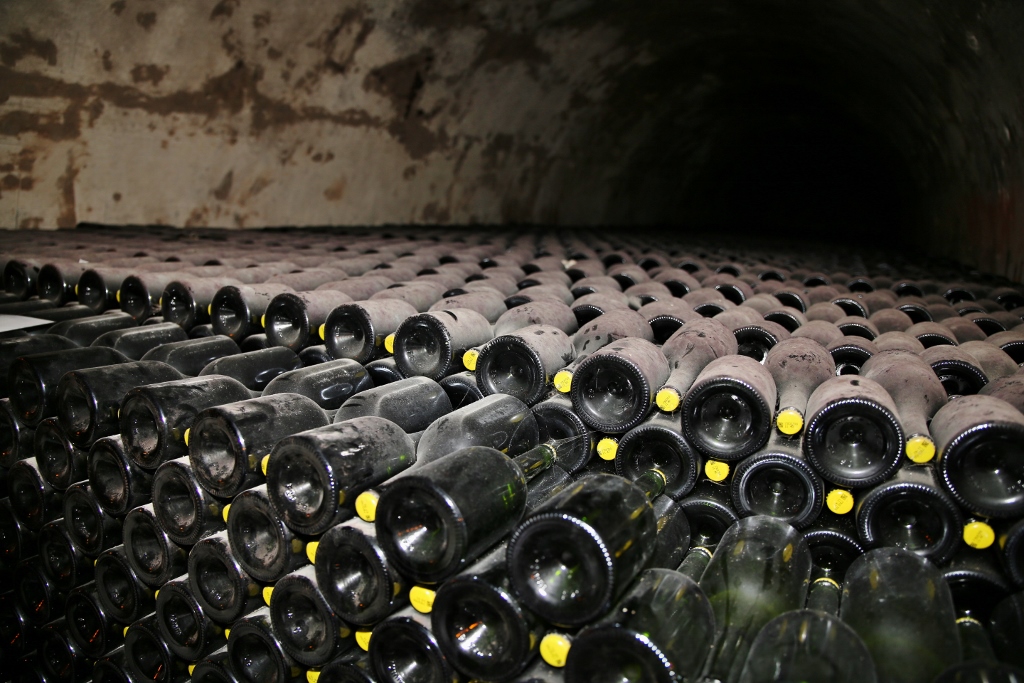 There are several methods to carry out the second fermentation. The most common is the traditional one or the Champagne method, where the cuvee is bottled with a mixture of sugar and yeast. The introduction of fresh yeast and a food source (sugar) triggers the fermentation process in the bottle in which sparkling wine will be sold. With special processes dead yeast cells are removed from the wine without releasing the carbon dioxide in the bottle. A dosage (mixture) of fresh wine and sugar syrup is used to adjust the sweetness of the wine after the removal of yeast. In the ancestral method the stage where yeast is removed is skipped and the wine is sold with the yeasts still present in the glass, that serve as wine sediment. When using the method of moving the wine from one barrel to another, after the wines have been fermented by the traditional method, including the stage where yeast is removed, the content of the bottle is spilled into a large tank, from where the liquid is drained for bottling.

Charmat method involves using pressurized stainless steel tanks for the fermentation stage. Fresh yeast and sugar are added to the wine which rapidly stimulates fermentation in pressurized environment. The wine is then cooled, cleared and bottled using a counter pressure bottler.

Carbon dioxide impregnation method is also the method used to produce soda and involves adding carbon dioxide to the liquid, without requiring a second fermentation. In this case, the carbon dioxide in the liquid is of exogenous origin, not endogenous. This method produces a large pearliness, which quickly vanishes. Such wines fall into the category of sparkling wine.

Pearliness or mousse in sparkling wines

An ordinary glass of champagne contains enough carbon dioxide to produce nearly 49 million bubbles. Wine expert Tom Stevenson claims that the number goes up to 250 million bubbles. The bubbles are formed initially with a diameter of 20 micrometers and increase as they gain buoyancy and rise to the surface. It is assumed that the bubbles in sparkling wine help accelerate intoxication by helping the alcohol to reach the bloodstream faster. In a study led by the University of Surrey, UK, subjects were given equal amounts of sparkling wine with bubbles and without bubbles. Five minutes later, those who had drunk sparkling wine with bubbles had 54 mg of alcohol in their blood, whereas the other group, that had drunk sparkling wine without bubbles had only 39 mg. 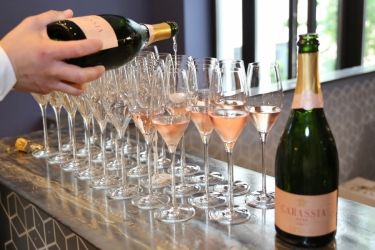 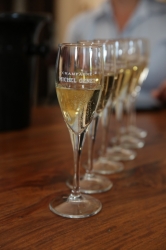 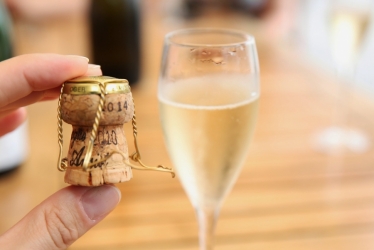 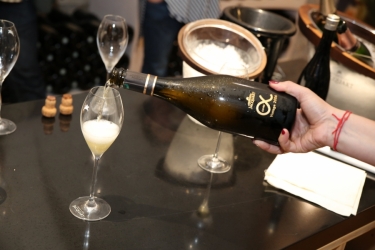